Sword Sands and Sinah Sands are exposed at the tide falls in Langstone Harbour from around 3 hours before low water Langstone to 3 hours after low water Langstone. This depends on tide height on a neap tide the banks may appear later and disappear earlier. Depending on numbers a good option is to take Sinbad and Carrier (as tender to get ashore so Sinbad doesn't end up high and dry). 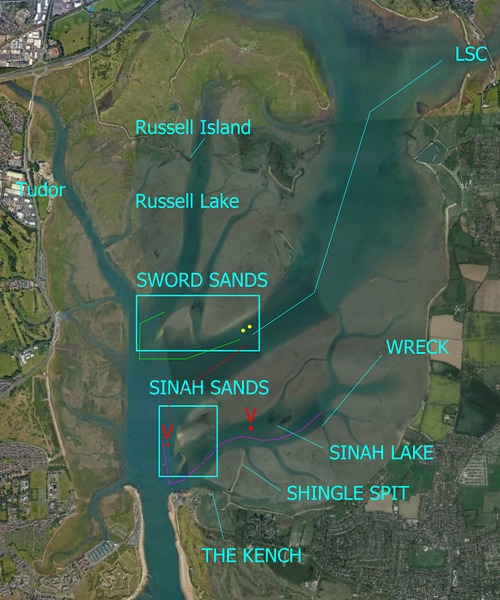 A visit to the sands best undertaken on a sunny summers day when the winds are likely to be force 3 or less. It's recommended to leave LSC approx. 2.5 hours after high water Northney, if using the rib it can be launched earlier and moored to Sinbad's mooring to avoid grounding after launching. Dinghies might be best to launch from the long slipway. It is approximately 3.5 miles from the Club to the Mulberry Harbour so an average sailor beating into a South westerly with a fair tide may take around 45 minutes to arrive at Sword Sands and 1 hour to arrive at Sinah Sands, in a South westerly the return journey will be a run home so possibly quicker.

Sword Sands is a featureless low lying sandbank which is quite remote from other parts of the harbour so quite peaceful, exposed and does not offer much shelter but on a sunny day there are pleasant shallows to swim in, a large golden sand bank to play rounders on, picnic, sunbathe etc. There is a shallow inlet between the two halves of the sand bank that is pleasant to swim in. When sailing from Langstone look out for the Ski Raft or two yellow moorings (as the ski raft is not currently in situ). Location (A) offers a good shelving beach to pull dinghies ashore, as the beach shelves relatively steeply Sinbad or LSC Rib can anchored just off the beach with a line ashore to pull them in when required. Location (B) is better if there is a moderate SE. When navigating around the SW corner of the sands it is shallow and often a lee shore so it's advisable to right out around the Starboard channel marker before heading back NE. 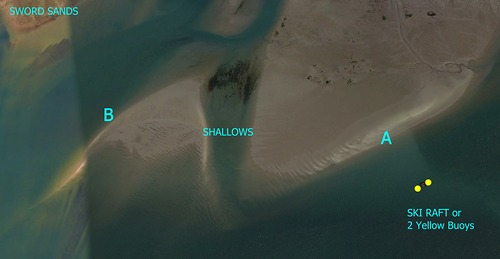 Exploring from point (B) it is pleasant to cruise up Russell Lake keeping between the channel markers, there are often seals to be seen and at the top is Russell Island which was occupied by local oyster fishermen until the war. 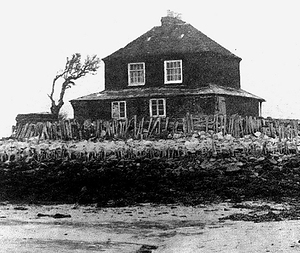 Sinah Sands is closer to Hayling and is slightly more sheltered by Hayling in S to E winds and by Portsmouth in SW – W, Sinah Sands generally has more visitors on a hot day so can become busy, there is the Mulberry Harbour to investigate and sand to picnic and play on.

THE TIDE CAN BE VERY STRONG TO THE WEST OF THE VISTORS MOORING, ESPECIALLY ON THE EBB – LESS EXPERIENCED SAILORS AND WEAKER SWIMMERS NEED TO BE MONITORED CAREFULLY

To the West of Sinah Sands there is a one visitor mooring (chargeable if the harbour master visits!). Many ribs and dinghies land and haul up the beach at location (C). Again, it would be advisable to anchor Sinbad / Langstone Rib just off the beach further NE of the landing point is usable but quieter. The Sands to the SW are shallow and it is interesting to explore the Mulberry Harbour. This is a great place for paddle boarding, kayaking etc. 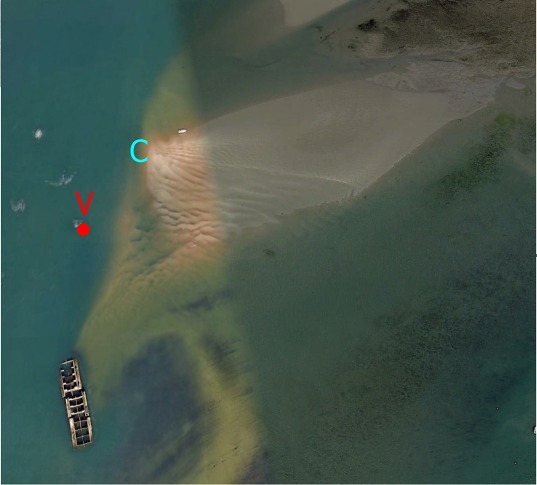 As there are no facilities on the sands you may need to take a trip to the Ferry Boat for essentials.

For a very quick stop point (D) is a good place to arrive in Sinbad or the Rib, the shore is very steep shelving shingle, it's not advisable to leave a boat here unattended. For a longer stope or arriving with dinghies it is best to anchor in shallow water at point (E) and pull dinghies up the beach here. This part of the beach is very busy with small children, jet skiers etc so BE CAREFUL ESPECIALLY WITH THE RIB PROP There is a strong back eddy between D and E which counters the tide so keeping inshore will generally mean you stay out of the main tide.

By negotiation with David West our bosun, it may be possible to arrive at point (F) and visit him for a cup of tea at the Kench. If arriving at higher states of the tide it is interesting to enter the Kench by water, this is another great stop to paddle board and kayak. 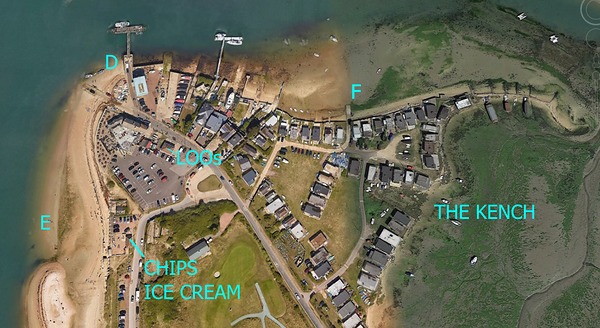 Other things to do.

If more exploring is the order of the day then a trip into Sinah Lake is worth doing. To navigate in continue south from the Mulberry Harbour until you are nearly at the Ferry Boat pub, turn to port at the fuel pontoon and follow the line of moorings in, the deepest water is probably just to the South of the midline of the moorings. As the moorings finish there is a shingle spit to starboard and a red visitors mooring to port. Leaving Sinbad moored or anchored and landing by Carrier would be a good option. The shingle spit was the original proposed route of the Hayling Billy and a failed attempt to annex a large area or Langstone Harbour for land reclamation. There are wild oysters, birdlife and good views of the Kench to enjoy. Further into Sinah lake there are many channels to explore and the wreck of a WW2 landing craft to discover. Members of LSC are affiliate members of Tudor Sailing Club, Tudor is accessible at all states of tide so a visit 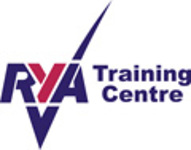 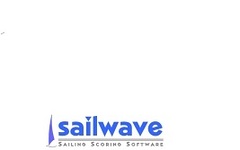